At the request of Antonio Diaz Florian director of L’Epée de Bois theater to welcome the audience before the show, I chose to invite every evening an artist or an academic whose work was thematically related the show.
Between 8 and 8:30pm a quarter of an hour to warm up for the encounter.
The story unfolding on stage and Brathwaite‘s text open paths to reflect historically, poetically, politically on our times. I always wish to share the show as an artistic object as well as an intersection of thought. 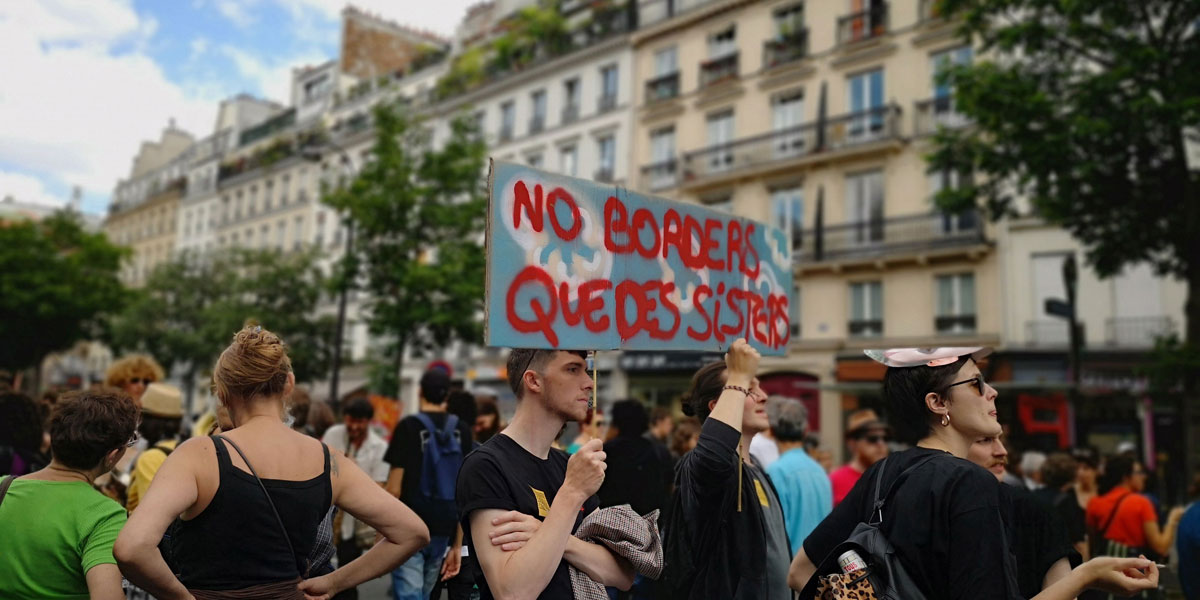 Rashida Bumbray – Senior program manager for the Arts Exchange Program at the Open Society Foundations – OSF – New York
Lorraine Mangonès – Executive director of the Knowledge and Liberty Foundation – FOKAL –  PORT AU PRINCE
Each took the time to send a video message on the occasion of the diffusion at the theater of l’Epée de bois. Explaining why Cie Awa’s work on Brathwaite and its articulation between migration and colonization received an Arts Exchange grant.

With Florence Gauthier historian of the French and St Domingue/Haïti revolutions. Florence Gauthier chose to clarify 3 expressions included in the glossary given to the audience before the show.
Christians : term used by Bartoloméo Las Casas «  Las Casas who is a priest, used  the terms christians desposts and tyrants to name the fracture between the conquerors and the conquered on the idea of humanity. This fracture deeply divided all concepts related to humanity : sensibility, relationships, political and cosmoplitan ethics, and christian religion itself »
Salvages :  term created by Brathwaite  « … this term brings together  slave and savage.These two words brought together  hold all the misery of the New World : to be a savage condemned you to slavery »
Kumbit : used by Brathwaite « haïtian creole word which means to work together. This term comes from a particular form of organization of the Haitian peasantry which mixed individual and collective work in a clever and pragmatic way and made food sovereignty possible for the country  from the Independance in 1804  to the 1950’s.
Florence Gauthier is the author, among others, of L’aristocratie de l’épiderme (éditions CNRS)
Triomphe et mort de la révolution des droits de l’homme et du citoyen 1789-1795-1802 (Editions Syllepse)

With Laetitia Tura who leads a photographic and audiovisual reflection around the representation of borders, invisibility and memories of exile. laetitiatura.fr
She has co-directed with Hélène Crouzillat the documentary film « The messengers »

This documentary treats of the lack of burials and of the disapearance (of pepole) on the paths of exile, the perspective of the directors and the welcome they gave to her subject , remind me of what Léonora Miano said in an interview : «  to be able to create beauty with what produces suffering is the promise of better tomorrows » Thus I remember the joy and consolation I felt when I watched  The messengers.

With Tony Mango president of ERITAJ association for promoting Creole languages and cultures. Himself a teacher of Creole, Tony Mango took us on a journey through the various Creole landscapes.

« I ‘ve filmed the sea in slow motion through a red filter » Bloody sea is made in the context of Alix Delmas’s Medium work which started years ago. We projected this work by converting, for one evening, part of the theater space into an exhibit space. Allowing the audience to walk, or sit down to contemplate the work and its movement.

The Cie and I thank all our guests to have played the game of sharing and reflection.